It hadn’t been my intel that led to the raid but I still felt responsible, a voyeur in a Herman Miller chair sipping bad coffee while men died.

My fifth novel, Hangfire, is releasing in the coming weeks. When I first put The South Coast out in 2013, I wasn’t sure there would be a second book. But now I have the third in my Eddie Holland detective series coming and am already hard at work on another suspense novel.

I have designed the covers (and interiors) for all of my books and used my own photography for two of them so far. Only due to time and access have I stopped using my own images as much. It is a great feeling, owning everything about the book, from the words inside to the front and back cover.

In creating the covers, though, something new developed during the design of the newest one, Hangfire. The title refers to a type of misfire when firing a bullet. It’s a delay between pulling the trigger and the bullet actually shooting out of the weapon. I used the title for some obvious reasons late in the book as well as feeling that the plot builds up, feeling like something is about to give at any moment but you don’t know when.

So when I went about making the cover, my first thought was of a gun. They feature prominently in the book, as they do all of the Eddie Holland novels. He is a former FBI agent turned private detective, after all. I played with the design for a couple of months, here and there, while actually finishing writing the book and getting it through editing. Last week I sat down to finalize it, and was happy with it. But it isn’t the cover I’ve posted on Facebook. As soon as I shared it with a couple of friends, some raised concerns that the cover wouldn’t be appropriate in the current political and social climate. And I knew exactly what they meant. It had been in the back of my head the whole time but I felt I was overthinking it. Hearing it from a trusted friend cemented it. 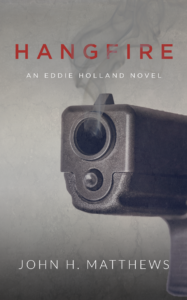 As you can see, the original ‘final’ version was a lot more ‘in your face.’ It works. It draws a reaction. But in the end I decided it wasn’t the reaction I wanted. I like my books to stand on their own, not to be something to be used as an example of how not to do something.

I’m sure someone will call me a ‘snowflake’ or some other derogatory term for liberals. But I am happy with my decision and feel the final cover is much stronger.

Hangfire is a bit different than the first two Eddie Holland novels. With each book I release, I say I couldn’t have written it without having written the ones before it, that I learn more each time and get better. And this is true of Hangfire.

I hope you pick up a copy (or Kindle version) when it releases and let me know what you think about it!

Read Family Line, available now at Amazon.com and most other booksellers.